Harri Pälviranta (born 1971, Finland) is a photographic artist and researcher. He holds a Doctor of Arts degree in photography from the Aalto University School of Arts, Design and Architecture in Helsinki (2012) and MA in Media Studies from the University of Turku (2005).

Recently his works has been included in exhibitions at the Fotomuseum Winterthur (Switzerland), Benaki Museum in Athens (Greece), Kunst Haus Wien (Austria), Helsinki City Museum (Finland) and Deichtorhallen, Haus der Photographie (Hamburg, Germany), and solo shows at Gallery H2O in Barcelona (Spain) and the Latvian Museum of Photography in Riga (Latvia). To name some achievements from the past, in 2007 he won the PhotoEspana Descubrimientos award and in 2010 he was awarded the LeadAwards prize in Hamburg. In 2020, he was awarded with a four-year full working grant by the Finnish Cultural Foundation (2020-2023).

At the core of Pälviranta’s artistic curiosity are issues relating to violence and masculinity, and often in his works he bridges these two themes. What is noteworthy is that he understands both of these concepts through their wide definitions. Like Slavoj Žižek, Pälviranta sees violence as a diverse practice: it can be seen as subjective and objective, and it can take both symbolic and systemic forms. Connected to this, his comprehension of masculinity is also layered: masculinity can be seen as culturally encoded and performed and renewed in commonplace practices.

Theoretically much of his work falls into practice that can be categorized as documentary. However, in Pälviranta’s use documentary does not only refer to classical documentaries, his work rather activates critical practices within post-documentary discourse. In his most recent finished projects, he connects with archival practices and uses documentary as a term also referring to materiality of the image. 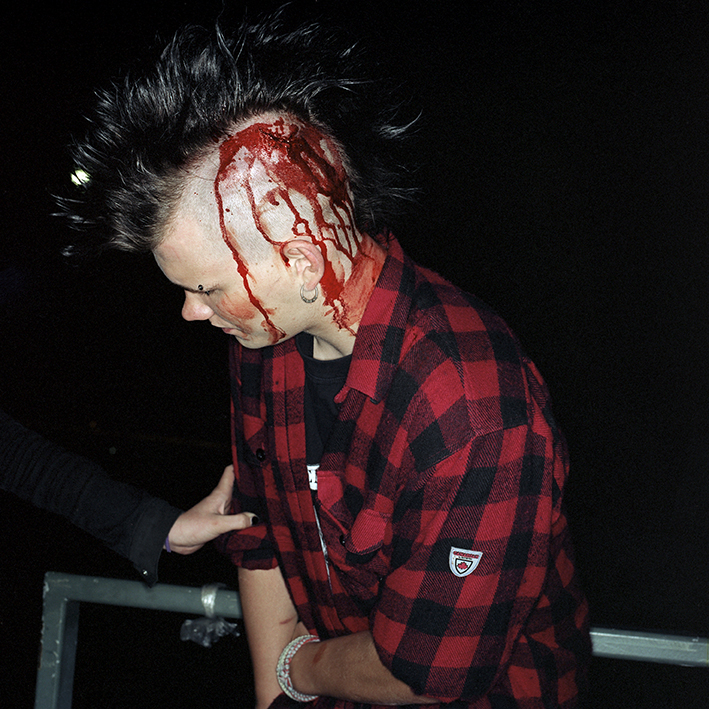 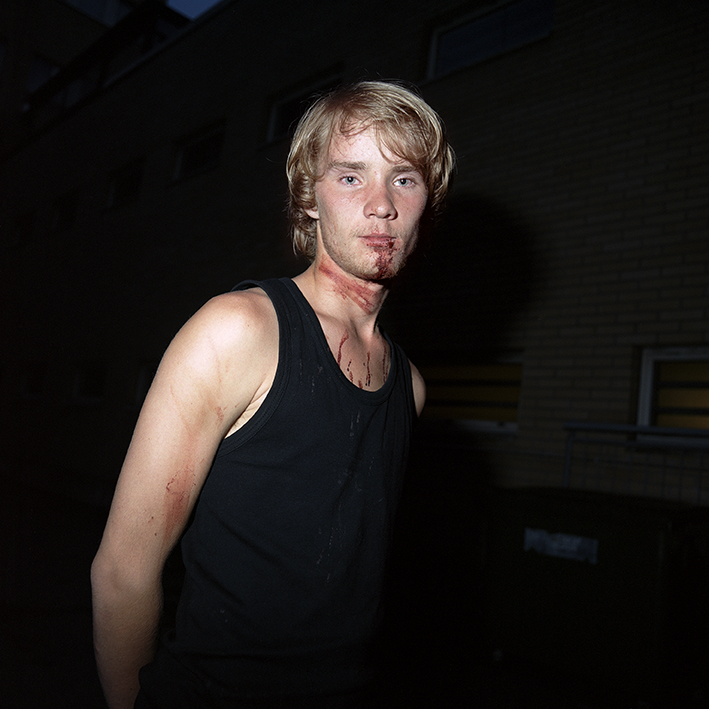 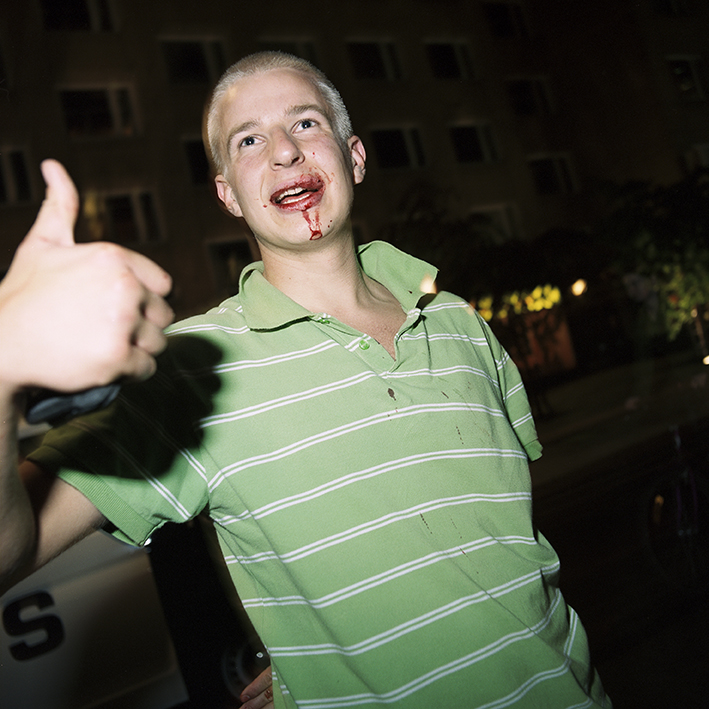 Batteries and street fights are everynight activities during the weekends in Finland. People have a strong tendency of getting rather intoxicated during the partying and once drunk, people are released from their inhibitions. Aggression turns into physical acts, to direct violence.

There is a social awareness on this topic in Finland, the issue is recognized, and it is considered to be a severe social problem. But the discussion has mainly literal dimensions, it appears in news headlines, and it is discussed in seminars. There are no images from these happenings.

By photographing assaults and batteries, Harri Pälviranta wishes to show the real faces of street violence in Finland. In contrast to the stereotypic portrayals of male heroicism and the worn-out attempts at shocking people he is interested in dealing with the utmost banality inherent in violence. What he finds more unsettling than any single representation of physical injuries is the everyday nature of street violence and the laissez-faire attitude towards it in the Finnish society. 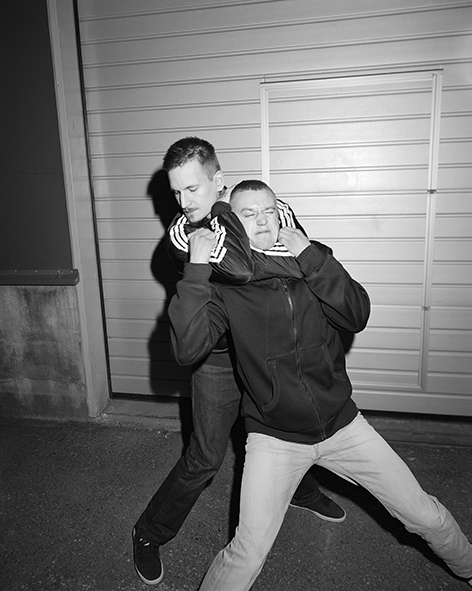 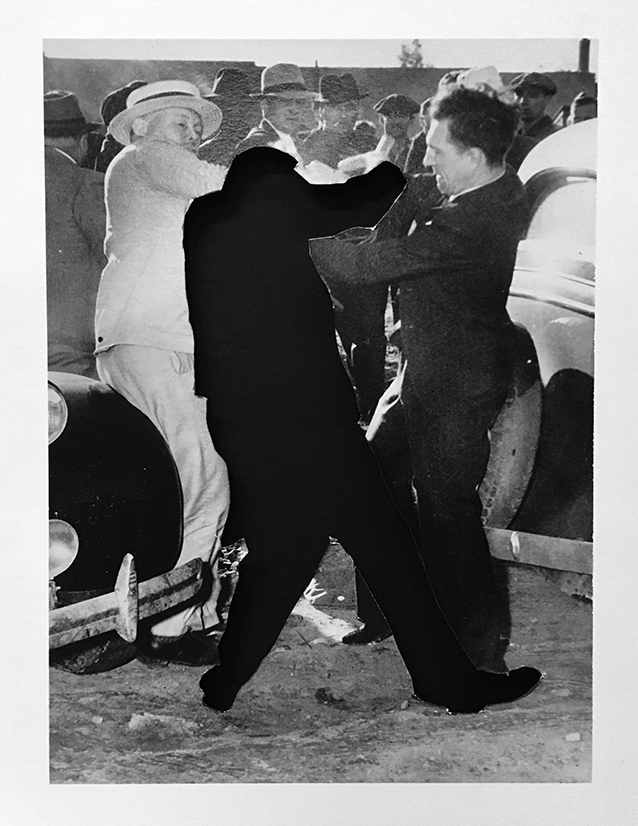 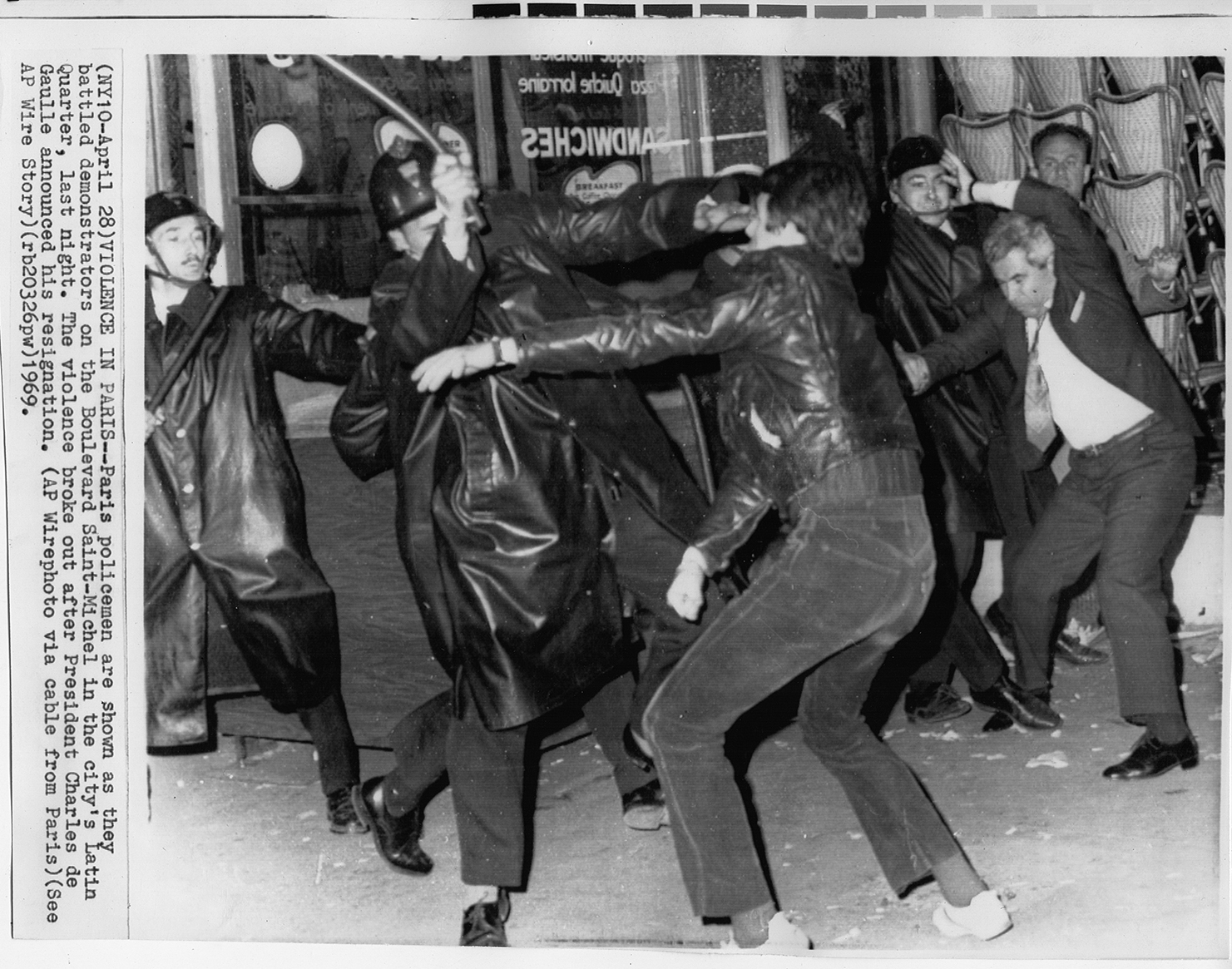 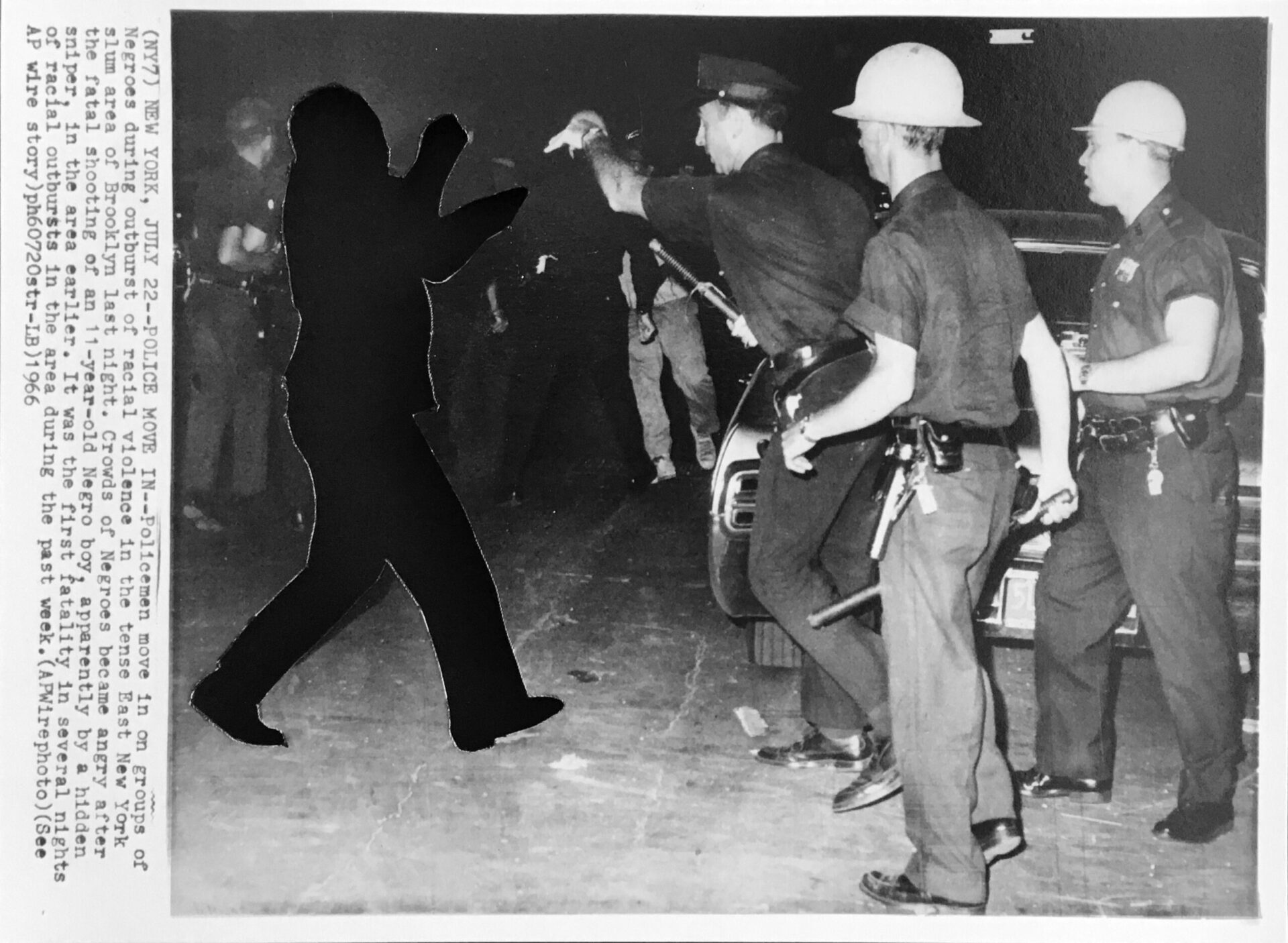 For the last twenty years, Harri Pälviranta has been collecting historical press photographs depicting actual acts of violence. Although this collection of odd and haunting news photographs constitutes neither properly organized nor historically grounded archive, it can be seen as a visual narrative of how actual violence was depicted in mainstream news media in the B&W press image era.

The collection appears as a starting point for Choreography of Violence. Pälviranta has analysed the photos – paying special attention on how the victim is portrayed and how his body reacts to the use of force – and based on this analysis, created new works. Thus, the collection functions as a reference and a material. Pälviranta conserves, cuts, rephotographs and reinterpretes the photos from the collection.

This manifold approach aims to visualize recurrent practices in depicting actual acts of violence. Modes of historical press photos may also mark the contemporary way of visualising violence. Pälviranta’s practice can be seen as artistic research. Within this framework, pictures articulate not only facts but also emotions, carnality, oddities, passions and uncertainty. In this manner, they aim at provoking more alternative verisimilitude than conventional written research reports. 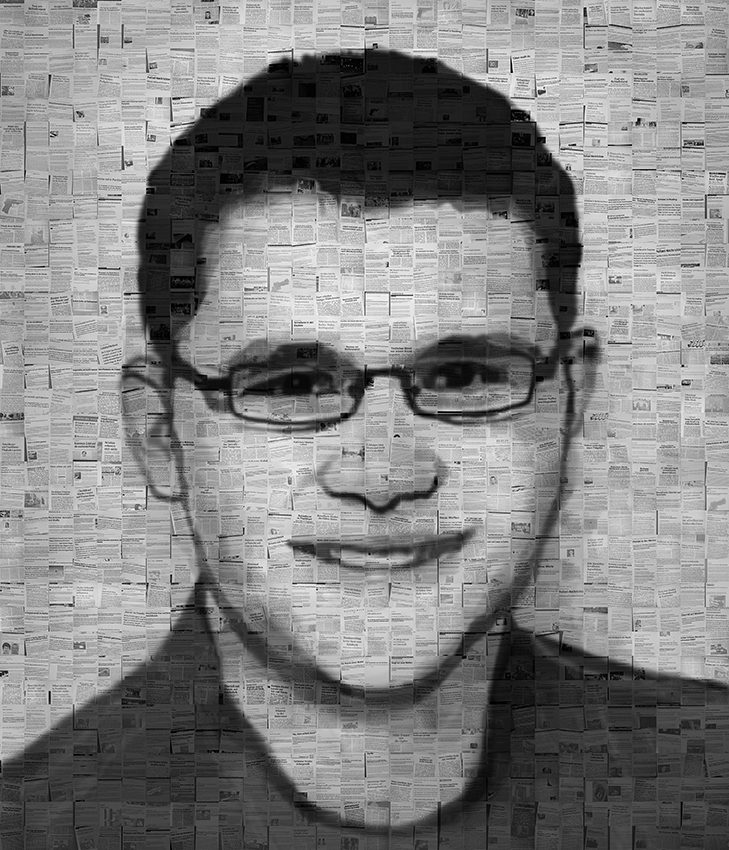 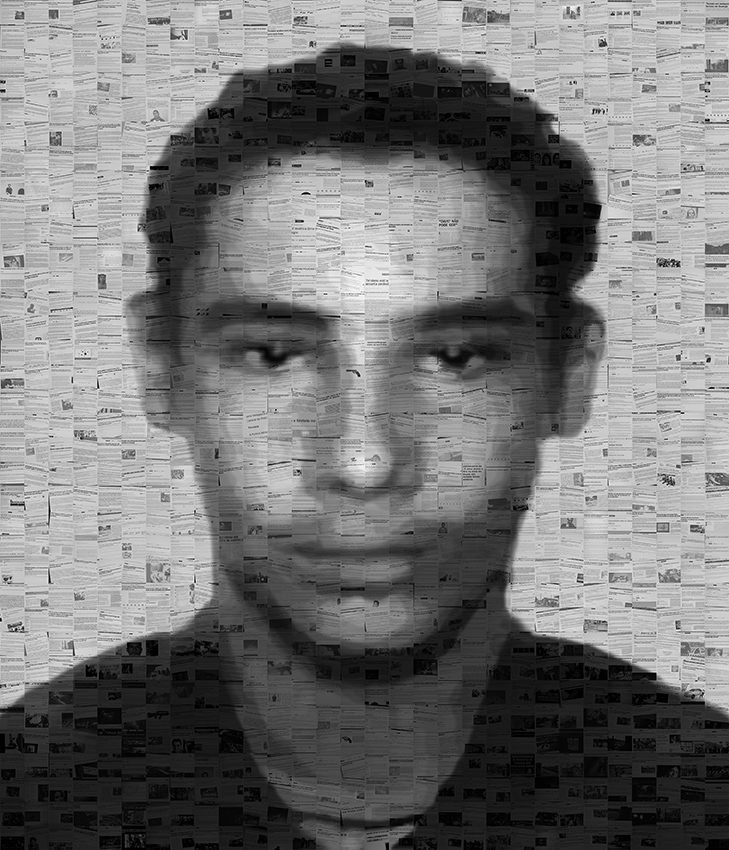 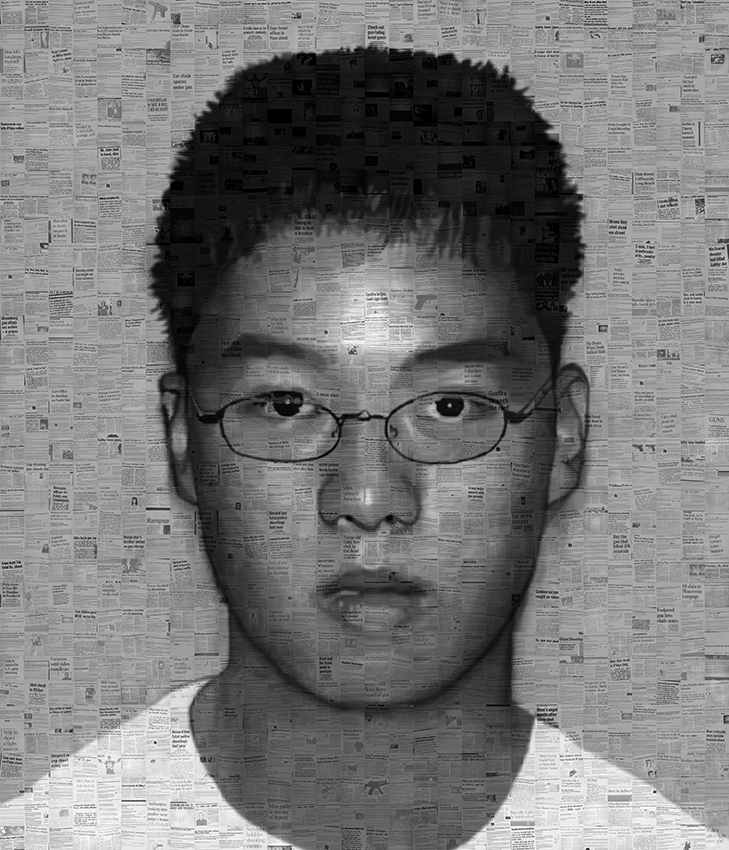 These images are portraits of the perpetrators of the ten most fatal school shootings since the Columbine massacre in 1999. Five of the shooters are from the USA, two from Germany, two from Finland and one from Brazil.

School shootings are rare, but repetitive phenomena, with the perpetrators sharing significant similarities. Research shows that school shootings are acts motivated by individual troubles rather than political motives, and they are never totally impulsive acts. Rather, the shooter, a young man who is a student or former student of a particular school, will slowly become excluded from his peers. Often, he faces bullying at school. His family circumstances may be normal but the young man himself feels alienated. There is usually some sort of serious drawback in his personal life and he feels rejected. His final attempt to redeem his position as an alpha male is to commit an act so horrific in scale that it will give him eternal fame.

The treatment of school shootings in the media has both positive and negative effects. On the one hand, the dramatic stories can construct a myth around the shooter making him the idol he wished to be, encouraging copycat behaviour and celebration of violence. On the other hand, media presentations of violence people can confront the horrible act from a safe distance.

As Susan Sontag reminds us, photographs of agony not only remind the viewers of the explicit issues presented in the photographs, but also of the existence of a culture of violence in general. Connected to ethical considerations, images of violence can invite viewers "to pay attention, to reflect, to learn and to examine" not only the images and their aesthetics, but also the culture of violence they depict and of which the viewer is unavoidably a part.

Portraits of American school shooters are constructed from photographed clippings from American newspapers and Internet news. Similarly, the portraits of Finnish school shooters are constructed from Finnish media, the German portraits from German media and the Brazilian portrait from Brazilian media. All of the appropriated articles are gun and shooting related, and each portrait contains over a thousand different news headlines. Thus, this series is inherently multilingual and multicultural despite the singularity of each image and event, alluding to the social connectedness that these young men have through the Internet. Through social media and other web based practices these shooters constitute a kind of imagined community and common culture that this series hopes to reveal and understand.