Swedish Dads is based on a series of portraits of fathers who belong to that small percentage of fathers who choose to stay at home with their children for six months or longer. With this project, Johan Bävman wanted to find out what made these fathers stay at home so much longer than most of their peers.What have they gained from this experience? In what way has the decision to take parental leave changed their relationship with their partner and their child? What expectations did they have before going on parental leave?Sweden has one of the most generous parental leave policies in the world.The current system allows parents to stay at home with their child for a total of 480 days, while receiving an allowance from the state. Ninety days are earmarked for each parent, and cannot be transferred.The purpose of encouraging dads to take more parental leave is to promote gender equality.Despite a generous allowance, only a fraction of Sweden’s dads uses all of their allocated parental leave, and only fourteen per cent of parents split evenly.Johan Bävman has two aims of this photo project. Firstly, he wants to illustrate Sweden’s unique parental policy. Secondly, he wants to inspire other fathers – both in Sweden and further afield – to see positive benefits of taking a more active role in their young children’s lives.He doesn’t want to glorify the fathers in this series. Instead, he seeks to engage in a debate about why these dads are considered special. The project Swedish Dad was photographed over a period of two years. 45 dads were portrayed with their children, and the work was first published in 2014. Johan Bävman has won numerous awards, both in Sweden and internationally, for this series, and the pictures have been shown on several photo festivals around the world. The Swedish Dads exhibition has also toured internationally with The Swedish Institute. To date, the pictures have been shown in sixty-five countries and more to come. 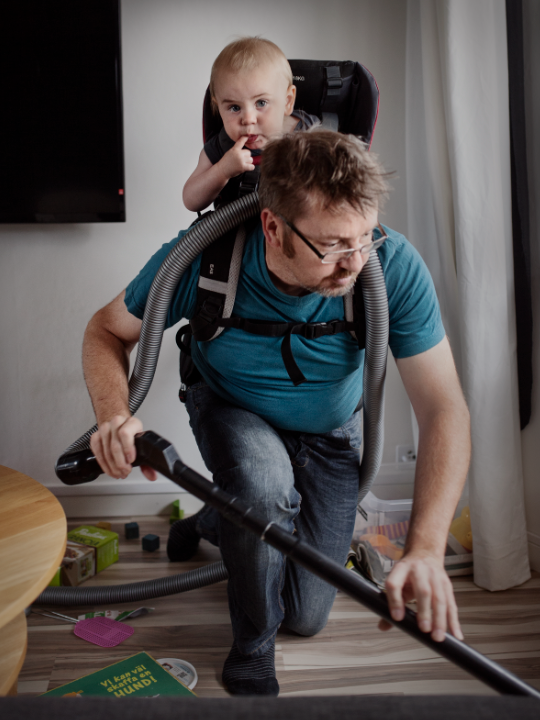 Johan Bävman (born 1982) is an independent photographer/filmmaker based in Malmö, Sweden. He combines his own photography projects with journalistic assignments around the world. Between 2008 and 2011, Johan Bävman graduated as a photographer in Sydsvenskan, one of the largest newspapers in Sweden. He graduated from Nordens Fotoskola, Stockholm in 2007. In the past he was a member of the Moment Agency [2007–2015]. His work was awarded by World Press Photo, POY, Sony Award, NPPA, Photography UNICEF Prize Photography Prize TT and Photo of the Year (Sweden).