The Names of Love

NAMES OF LOVE is a series of portraits of the brazilian LGBTQI couples and families, documenting gay, lesbian and trans people living together – married, common law or in stable relationships. The ongoing project has documented 30 couples and families who posed and shared some of their life stories. It proposes reframe the traditional family portrait, an image genre that helped legitimize the patriarchal family since the beginning of the invention of photography in the nineteenth century. Having as models the new arrangements of contemporary queer families, Simone Rodrigues performs her portraits in sober poses, without artifices, with people living naturally in the familiarity of the home environment.The series Names of Love rereads the traditional family portrait to make a contemporary approach to the diversity of Brazilian families aiming to promote their social visibility and naturalization, acting against conservative stereotypes.The project is also a tribute to the memory of Stonewall, which in 2019 celebrated 50 years. As we all know, its is considered worldwide as the starting point of the current movement of LGBTQI liberation and fight for civil rights. With all the advances that may have occurred since then, we still find ourselves amid fierce disputes for recognition of the homossexual and transsexual rights, fighting against homophobia and other forms of discrimination. This combat has been most necessary in Brazil, which is one of the recordist countries in number of muders and other violent crimes against LGBT+ people. 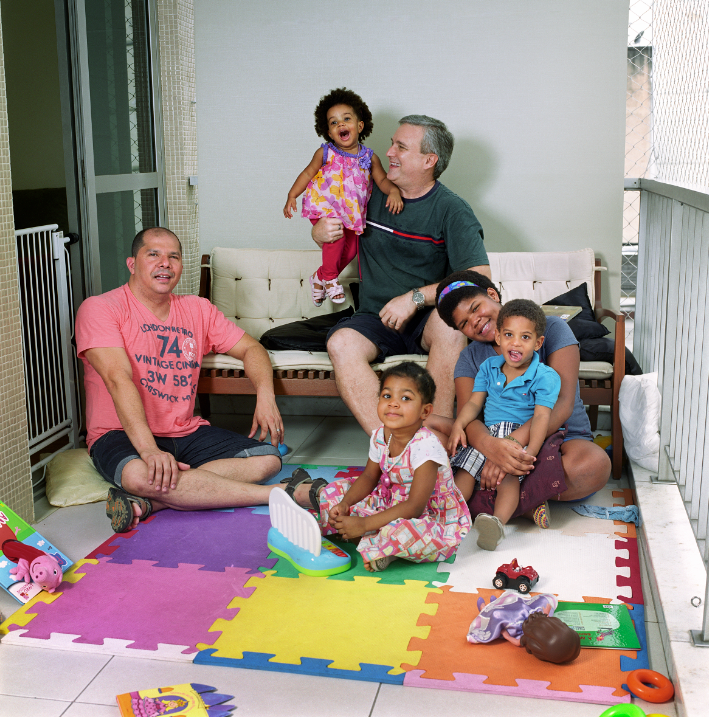 Simone Rodrigues is a brazilian visual artist, educator and independent publisher. She works (since the 90’s) with the organization of art and photography exhibitions and workshops, with emphasis on collective projects. She was co-founder of Foto in Cena (show and producing company) and Ateliê da Imagem (school and cultural space). Master in Social History of Culture, she is currently a professor at the Parque Lage School of Visual Arts, in Rio de Janeiro. She is also editorial director at NAU Editora, publishing art and humanities books. Her special interests are the symbolic aspects of photography as a visual language, their hybridizations with other media (vídeo, object, instalations, performance) and the convergences between fiction and documentary works. In particular, her work investigates issues of identity, gender, body and memory. She launched her first authorial book in 2016, the project Names of Love. In 2019, this project was part of the group exhibition, “What is going on in Brazil?”, which was part of the official program of the 50th commemorative edition of the “Rencontres Arles” festival in France. She has a few pieces of work in Joaquim Paiva’s Collection and participates in the publication “Fotografia Brasileira, das Origens ao Contemporâneo”, organized by Angela Magalhães and Nadja Peregrino (Funarte, 2004).